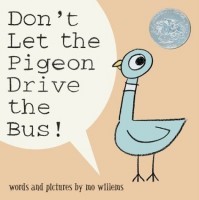 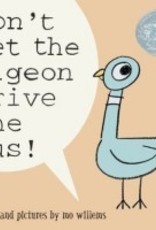 People look at this Caldecott Honor winner and scratch their heads. The story seems so elemental—a big-eyed light blue pigeon tries to persuade readers to let him drive the bus, even though the bus driver has warned us not to. When. it was first published, I read this wacky little easy-to-read number to my sister-in-law Ann Guthrie's preschoolers at the Antioch School in Yellow Springs, Ohio, one of the oldest preschools in the country. The three and four-year-olds went wild over it. "Hey, can I drive the bus," the gimlet-eyed blue pigeon asks them straight out. "NO!" they chimed. The persistent Pigeon, tries every angle possible, from whining to temper spells. The children talked back to the pigeon. They decided there was NO WAY they were going to let that pigeon drive that bus. No how. And aren't these same kids begging and pleading with their own authority figures to let them stay up late and do forbidden stuff? You might think they would empathize with the poor pigeon and cut him some slack, but it didn't happen. As the Pigeon says, "What's the big deal? It's just a bus." I've used this book with kids through high school, and the same thing happens—listeners interact with the book and with all its sequels.